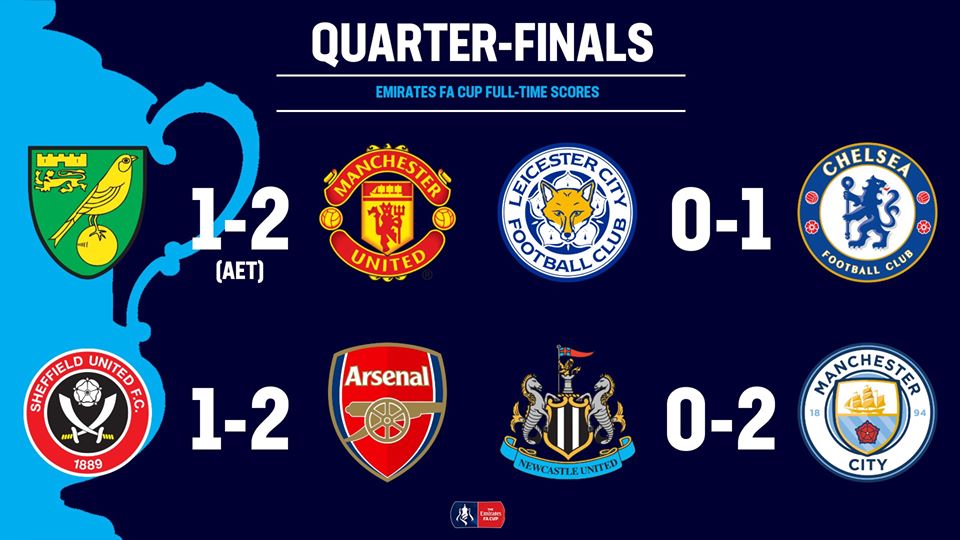 Defending champions, Manchester City defeated Newcastle United by 2 – 0 in the quarter-finals of the Emirates FA Cup.

Goals from birthday boy, Kevin De Bruyne in the 37th minute through a penalty and a second-half strike by Raheem Sterling ensured a semi-final place for The Citizens.

At the King Power Stadium, Leicester City lost 0 – 1 to the Blues. a second-half goal in the 63rd minute by Ross Barkley was the difference Chelsea needed to make it to the semi-final.

A last minute goal by Dani Ceballos gave Arsenal the lead and a semi-final place in the Emirates FA Cup.

The Canaries lost to the Red Devils at home 1 – 2. Sensational striker, Odion Ighalo broke the deadlock in the first half as he poked the ball past the opposing goalkeeper, Krul.

Norwich City got their equaliser in the 75th minute when Todd Cantwell’s well-placed volley beat Sergio Romero. Harry Maguire’s late goal in the 118th minute of the encounter sent Manchester United to the semi-finals of the FA Cup.